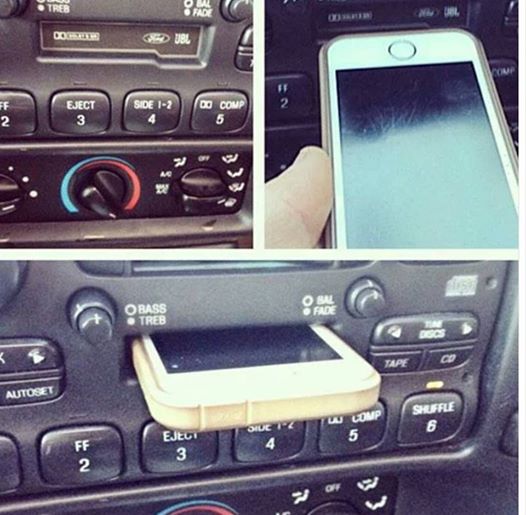 This story has gone viral online because it’s simply funny.

A young man went to a car dealership with a complaint. He said that the iPhone charging station would not charge his phone and it was scratching it. The dealership owner took some pictures of this “problem” and went to social media.

The person was shoving his iPhone into the cassette player!

Amazing, but entirely true. BuzzFeed looked into it and found out that the pictures were not taken of the driver’s iPhone and cassette player. Instead, the owner took an old iPhone, put it in the cassette player, and took photos that way.

To prove that the story is indeed true and that someone really did think the cassette player was a charging dock, a Reddit user posts that his brother was the one who thought the player was a docking station.

For everyone out there who has a friend or family member who doesn’t know what a cassette player is, go ahead and let them know that back in the day people didn’t have MP3s or CDs. There were cassette tapes and they had to be placed into these “docking stations” to play.

For anyone who has an iPhone that has been through a similar situation, iResQ is here. Our certified technicians can repair iPhones to make them look as good as new. This means replacing scratched screens or the back of your phone. Sometimes, if the lightning connector (charging port) has been placed where it doesn’t belong, it can become damaged. This means that it could end up needing a replacement. iResQ can help you with that as well.

Please review our iPhone repair page to find the repair you need for your phone.