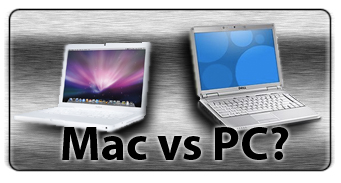 Ok, so the Chiefs lost this weekend, we all knew it would happen. That doesn’t make me less of a fan, it just makes me a realist, but one way I could always find to make a Chief’s defeat better is by winning a game of football on my own. No, I don’t play professional or even semi-professional football. Actually I don’t even like going outside in Kansas during the winter, which is why I stay inside and play a nice game of NCAA football. I know, I know, its not pro football, but I think it is more fun.

So I was a couple of games in when I was thinking about how many people prefer to play console games versus computer games. Then I started to think about how many people who play computer games play them on a PC or Mac. And from that my mind brought me back to the infamous debate of Mac vs. PC. Now, I know that some people are emotionally attached to one side or the other and that is fine, but for those of you looking to buy a new portable or desktop, it seems like now is the time to buy a Mac.

You may say, “I don’t know anything about Macs, how am I supposed to read my emails?!?” Well there are many options in Mac OS for this, but let’s say you absolutely do not want to learn how to Mac OS, well there is a new thing for you… Boot Camp. With Boot Camp, a program that comes with Leopard and can soon be purchased for Tiger, you can re-partition a chunk of your hard drive to setup a Windows partition. You don’t even lose data re-partitioning. With this program you just go through the initial settings process and once complete you can restart and install Windows on that partition. Once complete you just hold down the Option key when starting up your computer and you can choose which operating system to boot into.

Now I know that Macs are a little more expensive that PCs, but you must know that you are getting what you pay for. We have recently done some work on a couple of PC laptops (no, this is not a service we offer as of yet) and the architecture, the way they are built, is archaic compared to the Apple portables that are the same age. The newer Dells and Gateways are built like the older iBook G3s and G4s, with heavy and unnecessary masses of plastic. A large portion of the newer PC laptops that have come out weigh on average of 8.5 to 9 pounds. The lightest Apple portable is the MacBook weighing in at 5lbs and the heaviest is the MacBook Pro 17″ at 6.8lbs.

I know there are plenty of reasons for each side, but if you want more bang for your buck, get a Mac. With Boot Camp, it’s a “check mate”. And no, I don’t usually think of this stuff while playing video games. Yes I am a nerd.