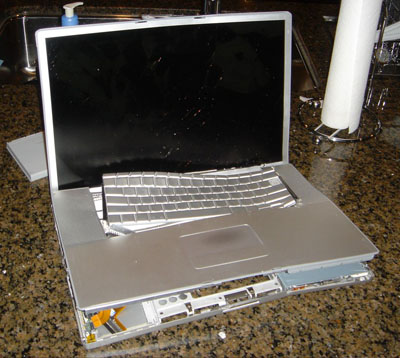 For the record I did end up coming in on Tuesday, the day of the ice storm. I was late, but I did come in. I was also at home drinking hot chocolate when Eric was writing his blog, so deal with that. Anyway, we deal with hard drive failures every day here at iResQ. It could come from an iPod or a PowerBook, a Mac Mini or a MacBook Pro. Every day we get failed hard drives in here, and customer ask the inevitable question, “What would cause this to happen?” Well hopefully I can answer that question and perhaps a few more.

First off, I am going to briefly do a simplified overview of your hard drive and what it is made up of. A hard drive has at least one, often times many, platter(s). Platters are what hold the data, they are non-magnetic material usually made of glass or aluminum and those are then covered in a magnetic coating. They can be written to, which will either give it a positive or negative charge. This happens millions of times across the hard drive to create a message that your computer can read.

What reads and writes this message are the read-and-write heads. This head is mounted on the arm called the actuator arm. Simply speaking, this is like the arm on a record player and the head would be like the needle. This will be important to visualize.

Now on to what could cause your hard drive to fail. Since the read-and-write head is located so close the platters of your drive, there is little room for movement beyond what it is designed for. If something comes in contact with a platter or the head it could cause a head crash. If a head crash occurs it will cause the head to scratch the surface of the platter, like a record player needle scratching the surface of a record. This would cause data loss, making the computer not able to boot.

A head crash can be caused by physical damage, corrosion from liquid damage, electronic failure, sudden power loss or just a long time of normal everyday use. Physical damage is self explanatory, visualize the record player and what would happen if you just dropped it while it was playing. Hard drives have a controller board which is a small circuit board that interprets data sent to the computer, corrosion would damage this board causing it to not be able to function at all, making your overall hard drive become useless. An example of electronic failure would be if something shorted out the controller board, once again, causing it to become inoperable. Sudden power loss could cause the heads (which change the charge of the platter to make readable data) to stay above the platter which would cause data loss. When the hard drive powers down correctly, it will move the arm with the head to a safe place where data is not stored. Normal every day use, most commonly after a few years, could cause the integrity of the platters to become compromised after parts of the platter have been written to over and over.

Has your iPod or MacBook fallen off of the couch? Was it turned on when it happened? Even though it was from a small distance to a soft surface, it doesn’t take much of an impact to cause damage. Moral of the story, your Apple products just seem to work better when they aren’t dropped, but when they are, iResQ can repair them.